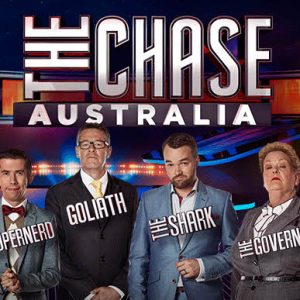 It not unusual for us to provide a large bow for promotional purposes. That's one of their many uses. This was a little different however...

We got a phone call the other day. "Hey make sure you watch The Chase on Channel 7 tonight – I’m on it"
Once our cousin got off the phone it got us thinking about the Chase Australia.

We did some digging and found an article about The Chase Australia that appeared in the Herald Sun Television pages back in September last year.
The host of the show Andrew O’Keefe is shown leaning back on a large box – with one of our large King sized Bows!
We must admit it was the first time we ever heard about our bows being used to promote a television game show so we kept a copy of the article.

With over 200 episodes now aired here in Australia it is also interesting to note that "O’Keefe predicts The Chase will last another three years" in the article but just last week the first episode of The Chase Australia aired in the UK, which is where the original concept of the program aired – This indicates to us that that The Chase Australia might still have lots of legs!

For all those playing along at home – our cousin didn’t win the big money and for us we continue to hand make King size bows here in our Tullamarine complex, so if you need to celebrate big, with a big bow we make a big bow in several colour options and can often ship within 24hours.